Between Tile and a Hard Place

July 22, 2015
Now it’s time for the kind of post you hope you don’t have to write when talking about a home renovation. What happens when the contractor makes a mistake? Not a little ‘forgot to order a light fixture’ kind of mistake but the kind that goes against your specific instructions. We’re there and because I’m trying to document the process honestly I’m going to share. Also, I really want to know how you would respond to such a situation.

Remember when I shared the photos of the choices I made for the kitchen backsplash? I worked with a designer, for the first time, and she was the one to suggest that rather than use plain white grout between the tiles to go with something more updated, a grout that would act as an accent against the white but would blend with the colored glass tiles. I agreed with her and thought this would be a great look so we chose a grout called New Taupe. And yes, there are colors of grout- lots and lots of colors. It’s kind of bizarre and one more thing you have to choose. This is the accent tile I’m talking about:

There are matte bars and polished glass in red, clear, and shades of brown. A neutral grout would emphasize the glass colors.

And this is how the background tile would look: 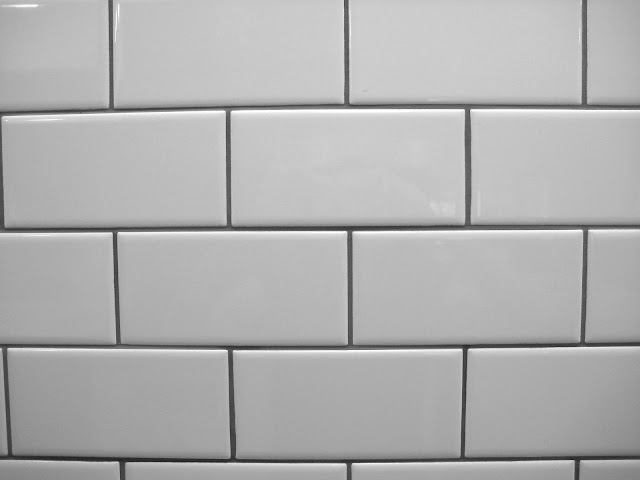 Well, instead of all that, the contractor did not read my email instructions carefully and told the tiler to use white grout. So, now we have this.

Now the white pops, not the accent colors, and the background tile is bland.

Because we’re living in the house, I walked in right after it was finished. The look on my face was bad enough that John, the tiler, said, “What’s wrong? Did I do something wrong?” I could not speak but kept shaking my head. I finally said, “This is not what I ordered. This is not how it’s supposed to look.” The poor guy could only say, “This is what I was told to use.” What was I going to say? Take it off? Wash it out? No, it’s grout. It’s set. The only way is to dig it out or to go further and remove the tiles. The first option would be incredibly time consuming and the second would be prohibitively expensive, wasteful AND time consuming. Granted, the expense would not be ours but still.

Look, I get it, this is not a human life or a catastrophe, but the tiling in the house is the second most expensive item we purchased when you add up materials and labor. Glass tiles average $22 a square foot. More importantly, it's a permanent and integral part of the house- we're in the kitchen every day.

I know plenty of people who would have pitched a bloody fit over this and who would have immediately demanded the entire thing be torn out and replaced. While that is what a part of me wants, I am mostly worn down and emotionally exhausted. More than anything I want these people (nice and polite as they are) OUT. OF. MY. HOUSE. I am tired of sitting in the basement, of hauling dishes up and down stairs because we can't use most of the kitchen, of making decisions, dealing with problems. I want it all to go away, but that's not an option.

I left this until Mr. G got home and waited for his opinion. When he asked me, I said, "I don't love it, it's not what I wanted, but it's OK." His reply, "I hate it and they'll have to fix it. This is important; it's our money and our house." I don't disagree, but how I wish they hadn't screwed up. We are 20 days behind schedule with no hard end-date in sight.

I have stood my ground before in my life when something is not done right or what I ordered is not correct but never in a situation when my frame of mind was so desperate to get out. It feels like a lose-lose. I want them gone so much that I will settle for sloppy work and mistakes. Not a good place to be.

How about you? Have you had an experience like this with a remodel? Or been in a situation where you'd sacrifice quality just to be finished?