September 02, 2012
It would be nice if I could be creative every year but this is still one of my favorite posts. Written last year to celebrate my 11th anniversary. Tonight is year 12 and he's still the best guy for me.

Standing with my father as he practiced lifting the blusher from over my face and smoothing it over my tiara. His hands shook and there were several tries before he could do it without making me look like there was a giant marshmallow on top of my head.


J showing up at my parents’ house. My calm and self-possession vanishing at that point; running into my parents bedroom. Frantically, calling my maid of honor and shrieking at her, “He’s here! Why he is here? I told him the ONLY fucking thing he needed to remember was he COULD NOT see me today before the wedding. Is he fucking stupid? I mean is it asking too much?” All before she could say anything more than hello. The f bombs flying like commas as I shredded his intelligence, his love for me, his ability to understand basic English. Turning away from the wall to see my mother standing in the room; the woman for whom ‘Jeez’ was cursing because she knew “you’re really taking the Lord’s name in vain”. Awaiting a serious dressing down and hearing only her kind voice, “Are you sure you want to go through with this?” Stopping cold before beginning an explanation of yes, of course but how could he be so stupid when she interrupted and said, “Then I think you should take this. Maybe just half” and handed me a Xanax. Ah, mothers.


Pizza lunch with my brother, who had been elected to deal with the nutjob, and then the afternoon to myself at the bed and breakfast where we would spend the night. Going to the drugstore and purchasing a bottle of Mr. Bubble because the room had a huge claw foot tub and a bubble bath would be the perfect relaxer before events took over.

Arriving at the salon an hour late because after being the timing police for everyone else I forgot what time I was supposed to be there. Hubris.


Prepped, dressed, and photographed, standing in the back of the church, carefully hidden from the guests and listening to the music while trying to stay calm. My father coming back, taking my hand, and smiling. “Doing all right? It’s almost time”. Feeling the need to cry but not sure why.


The aisle of forever, wanting to stop and say hello to dear friends I hadn’t seen in years before remembering that I needed to get to the front. Seeing J tall and serious waiting for me. Thinking I was doing so well until afterwards in the quiet of the limo going to the reception he told me that my hand trembled the entire time he held it. When I vehemently denied shaking he said, “Not shaking. Like a tiny animal when you hold it, shivering inside.” So much for control.


The hard part over, the party began. So many family and friends, so much love. Booze, food, amazing music. My own bottle of champagne because while it was pre-Bridezilla days I wanted what I wanted- a beautiful bottle of Perrier-Joet.


Dancing, dancing, and more dancing. Now it was dear J’s turn for fear because he was phobic about it. I told him we didn’t have to but he rose to the occasion. So tall and handsome that even standing still and swaying he looked elegant. Nat King Cole singing Unforgettable.


Frenetic jumping around to It’s Raining Men and my sister in law turning to me with a horrified look on her face to say, “My bra just slid down to my waist.”


At it was my father and his friends who were lined up at the bar doing tequila shots. The young folk were winding down and heading out. We had mingled, talked, hugged, and kissed so many people and yet there were those I did not get to see. How did it go so fast?


Arriving back at the inn and standing on the sidewalk waving at cars full of people who honked at us and yelled congratulations. Feeling a bit royal and not wanting to go inside because really, when would I ever wear a dress this grand again or a tiara?


Getting to the room and finding that my sister-in-law had covered the bed with M&Ms which worked out well because we were still hungry. Getting partially undressed (the tiara stayed on) and sitting in bed eating candy and rehashing the night until we both fell asleep.


Eleven years ago today I was a bride. 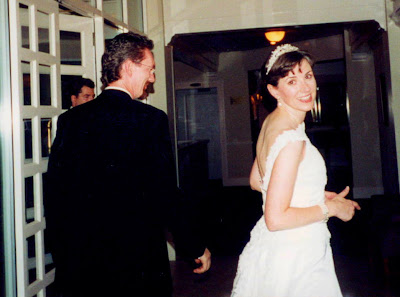