May 12, 2012
I’m sitting on a cheap white plastic chair in the local mall on a Saturday and I might as well be front row at Fashion Week in NYC. Why? Because in 30 minutes TIM GUNN will be less than 2’ from me and I have a largely unobstructed view. I sit surrounded by a sea of technologists all clacking away and chattering while I write in my day planner or read from my (gasp) book. Not an e-reader but good old print. It is, of course, Tim’s book Gunn’s Golden Rules and if you’re like me you’ll believe I should be mandatory reading for all ages.


In case you’re new here, this is what I think of Tim (Geek flag). Oh, and this (Lifetime). He’s in Portland today to co-host a fashion show of Lucky Brand denim. Afterwards, there will be Q&A and then if you’re willing to shell out $100 (which sadly I am not) you can have your picture taken with him. Actually, they make it sound like you’ll get to hang out with him for hours, eating and drinking wine. Should I? I wouldn’t even want to rehash Project Runway or fashion with him. I’d be original and talk about books and what he’s reading and please oh please could I have an advance copy of your new book and after reading it, an interview?


Sorry, I drifted there. I’ll cut to the chase because this could go on for some time. Today I’ll discuss the most important stuff- Tim, Tim’s thoughts on a variety of fashion topics, what Tim was wearing, Tim and Project Runway, Tim. Tomorrow I’ll be back with the fashion show and a bit of commentary.


First of all, I took almost 40 pictures of Tim. Is that stalkerish? No. No, it’s not because I wasn’t hiding behind a tree at his house but as I reviewed them it felt a bit much. The important thing for Tim to know is: I deleted any that weren’t flattering because that’s rude. And with camera speeds the way they are now you are going to catch someone with their mouth wide open and eye shut. Here are just a few that capture his animation. 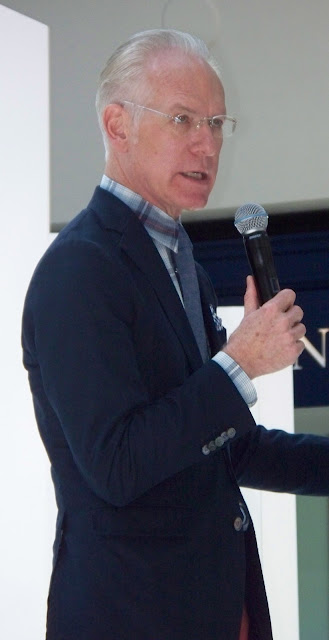 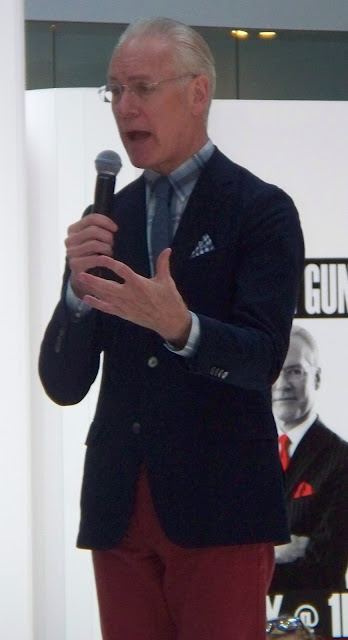 
The person who tries too hard with their fashion gets it wrong.


Even when you’re young and have a completely flat belly a bare midriff is dicey.


Cropped pants only work if you’re tall and slender. Otherwise, they work against you by cutting the line of your leg short.


When asked each season what “trend” he recommends, “The only trend that is any good is the one that works for you.”


Mixing patterns can be great but “think about scale, proportion and color.


Doesn’t care for bootcut and flare jeans for the majority of women because “they make hips appear wider” but if hips are not a concern then they’re all right as long as they’re not wider than your shoulders.


When trying to be “fashionable”: Listen to your viscera. If your gut says it’s ridiculous it probably is no matter what a magazine says.


Finally, Tim turned the tables on the audience and asked what we thought of season 8 Portland designer and winner, Gretchen Jones. The deafening silence prompted his reply, “Well, that says it all.” He then said he felt strongly that Mondo should have won (duh). He went on to tell us what happened behind the scenes, saying it was one of the most difficult seasons ever and that his at-home visit to Gretchen’s house was so uncomfortable it had to be heavily edited. Namely because her mother was there the entire time and at one point decided they should play croquet during which she repeatedly whacked Tim’s croquet ball out onto the street. That portion of the segment never made it to air.


During final judging the judges were split between Mondo and Gretchen until Michael Kors began promoting Gretchen against Nina and Heidi’s choice of Mondo.  Finally, Kors turned Nina by pointing out that Mondo had not made any changes to his collection despite their suggestions. Gretchen had. Nina turned leaving Heidi who left the stage and went to see Tim asking, “Am I crazy? Do you think Gretchen should win?” Tim said no, Heidi tried to fight but was out-voted. Oh the behind-the-scenes machinations! None of this was a surprise to me. I never liked Gretchen and thought her clothes were completely uninspired- suitable for The Loft but not much beyond that. Plus, she was a whiny, manipulative bully.