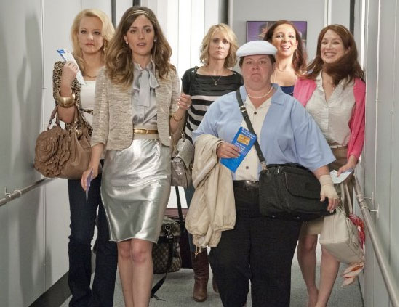 Let me begin with what may be one of the most important facts of this movie. IT IS NOT A CHICK FLICK. Yes, it is called Bridesmaids and is about a ritual that strikes at the core of women but it's filled with comedy so base and raunchy it will reduce any male to helpless laughter. I know this because I went with a male friend I have known for over a decade and in all that time I have never seen him laugh so hard, so loud, or so long. In fact, he was still doubling over as he relived scenes on our walk out of the theater to our cars, he almost hit another car in the parking lot because his eyes were streaming with laughter tears, his partner had to tell him to shut up when he recounted yet another scene while we were eating dinner (there are NO dinner conversation appropriate scenes in this movie), and finally, when I texted him this morning ‘Are you still laughing?’ all I got back was ‘hmmm grmph waahhhaaaaa’ which I’m pretty sure translates as yes. So there is one ringing endorsement for the success of the movie.

As for me, I did find it to be wildly funny for much of the time, ala The Hangover, which is not surprising as Judd Apatow is one of the  producers (which is good news for him as I heard Hangover II sucks big time- and not in a funny way). Here are my issues with with the movie. At over 2 hours there were several scenes that should have been cut completely or at least edited down. Namely, the one where Annie makes a gourmet cupcake from scratch with a fondant hand painted orchid on the top, stares at it longingly (really longingly and for a really long time) and finally eats it. I’m sure this was a big metaphysical moment in the film- the culmination of her feelings of loss and worthlessness over something she loves and a part of herself but honestly, it never comes up again so the point is lost. Yes, she owned a bakery and it failed but nothing more ever happens to that story line so why not save the money and the necessity for me to make a trip to the ladies room (2 hours and one 32 oz Diet Coke is more than my aging bladder can handle).

Also, please note this is an R movie and given the content I would not advise taking any person under the age of 18- no matter how sexually advanced they are- because they have pushed the R boundary to within minutes of an X. The f-word is used as a comma and even the c-word makes an appearance which is very unfortunate as I hate that word more than any other and really do not understand why it should EVER be used by anyone (I only think it about my husband’s ex and she has done some evil shit to us). Be prepared to expand your longshoreman vocabulary.

Finally, let me preface this comment by saying I am not a person who likes scatological humor. Vomiting, diarrhea, intestinal disorders, gas…none of these are funny to me, just gross. There is an extended, closely detailed scene about food poisoning while in a posh bridal store and I was so disgusted I wanted to leave (and come back when they were finished). Obviously, this is just me, because even the seniors in the audience (of which there were many) were howling. I’m just warning you.

All of that aside this is still a very very funny movie and one worth seeing. Just be prepared to see women acting as bad, vulgar, and disgusting as men. Not sure that’s something to aspire to but it's something that may make you laugh.
friends fun movies reviews