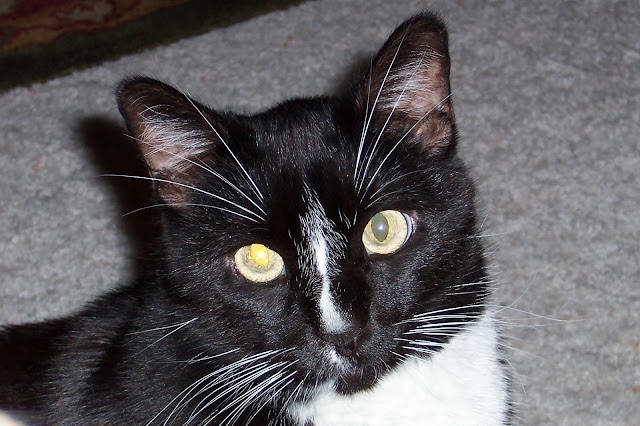 I’m not sure which is worse- the remembering of a sad anniversary or when the time comes that you remember you’ve forgotten it. I’m sure Dr. Phil and any number of other positivity gurus would say the former because it means you’re not healing. For me it’s the latter because then what was simply grief morphs into guilt. Seven years ago my very dear cat Gatsby died. Ten days after his death I was diagnosed with multiple sclerosis which is not surprising to anyone with the disease- a severe emotional or physical shock often precedes the diagnosis. To anyone who thinks that it is a touch melodramatic to go full blown into an incurable chronic disease over the death of a cat you can feel free to find another blog to read.

I have always owned and loved cats. I love everything about them and while I don’t mean to disparage their canine counterparts it is precisely their independent, non slobbery, no jumping barking histrionic personalities that I admire. It’s been said many times but pets often reflect their owners and I am definitely cat-like. Friendly enough but just as happy by myself and very capable of giving love and affection but needing my own time and space as well.

Gatsby was unique in that he was also a dog lover’s cat and possessed some dog-like qualities. He would sit patiently outside the bedroom door in the morning to say good morning and escort you to the kitchen for breakfast (his first, of course) and would also be sitting right inside the door when you got home from work, no motion or sound until coats and bags were put away and then he’d be around your legs making the cat noises that were the equivalent of telling you about his day. He would also fetch which was one of his greatest tricks because training a cat is not the easiest thing to do. He loved every crumpled piece of paper or small rubber golf ball that came his way. First there was the chase, then the pounce, a bit of a tussle because those things are fierce, and finally he’d come back to you, tail held high, and drop the object at your feet. To this day if I throw a piece of paper towards a wastebasket I expect to see him appear to grab it.

Our relationship was the purest I’ll ever have because he depended on me completely and in return loved me unconditionally. Without fail he was always there for me. You can’t have that with a human and I’m not sure you’d even want it. He died suddenly one night when we were all home together relaxing. I did not know you could cry that long and hard and even when I finally fell asleep he was dying in my dreams. I dreamt that I should quit breathing so much, that he was dying because I was using up his oxygen; very Freudian because he was so attuned to my every emotion and it did take a toll on him. That and the many moves, the addition of a man and a 6 year old noisy active boy to our quiet household, were simply too much. As my husband said, “He was tired. It was time for him to go.”

Even if I no longer remember the exact day it was one of the worst of my life. I will miss you forever my sweet furry funny guy.